A couple of weeks ago, a combined crew from all across Barfleet came together to take on a challenge that we had been planning for almost 2 years: Hosting a Barfleet Party at Star Trek’s biggest 50th Anniversary event. That crew rose to the challenge and succeeded well beyond our own expectations, with 2 very successful and fun nights of Barfleet entertainment.

This mission began as an idea over 3 years ago, when some folks who regularly attend the annual Star Trek convention in Las Vegas asked us if we might want to try bring our particular type of party to that event. We discussed it for several months before committing resources to it, and in 2015 a recon crew attended STLV to determine whether or not it was even possible. Could a group of people who all live and work east of the Mississippi actually pull off a decent party in Las Vegas, with limited resources and no way to get one of our Battle Bars to the scene?

Planning for the mission included coordinating with 2 local Barfleet members who had relocated to the area from Ohio, something that made the entire mission significantly easier. Most of the crew flew to Las Vegas for the mission, but there were also 3 cars driven cross country that provided us with some needed cargo capacity to handle things that were too expensive or fragile to ship.

We knew we would not have one of our own Battle Bars; we also knew that the suite we would be using did not have a bar we could use. That challenge was met thanks to the creative and talented mission crew through the creation of a field expedient bar on-site. When completed, most of our guests had no idea that the bar we were serving from was built that very day using nothing but cardboard boxes, floor protection film, and gaffer’s tape.

We did not have nearly as many guests as we would have liked, but we were pleasantly crowded much of the time. Fleet Admiral Roddenberry and several other special guests made both nights special, and we met a lot of new friends who we hope to see more of in the future. We had some donations to the dispensary that were pleasant and unexpected, especially several bottles of excellent Marz Vodka. And while we may have had more stock than we were expecting at the end of things, that just means we will get to share some of it when we share our experiences of this amazing mission with the rest of Barfleet at the many conventions and private parties happening in the coming months.

I can’t say when we’ll be able to do another mission to STLV, but I can say this with absolute certainty: We’ll be back. 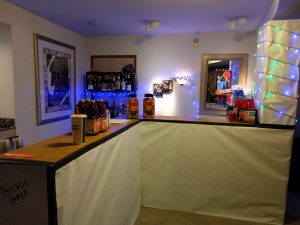 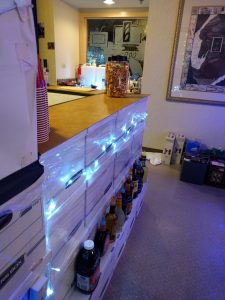 There are no upcoming events.

We are happy to announce that Cleveland Whiskey sponsored the birthday party of the U.B.S. Casual at Cleveland ConCoction in March. Everyone had a great time sampling their whiskeys and we look forward to serving their product at more of our events!